This is a painting project whose aim is to highlight women and their role in today’s society.

Very often underestimated, women necessarily have to work harder than men to assert themselves and play a decisive and important role in the world of work.

The women who have been involved in my new painting project will pose in various photoshoots.

The photos I will take of them will serve as the basis for the works that will be shown in a personal exhibition.

These women carry out different activities and are seemingly distant from each other, but what they have in common are their determination and independence.

I will represent these women in their private and working lives, whether they are chatting over coffee or working.

From cashier to entrepreneur, from model to dance teacher, from singer to actress,

from artist to sports champion, from dancer to gardener, winning women dedicated to their work and their passions.

I think that there are enough artists who talk about discomfort and violence in their work, I don’t think art should express only violence.

I don’t think that art has to light the negative aspects of society.

Sometimes it can also send a positive message, and that is my goal. 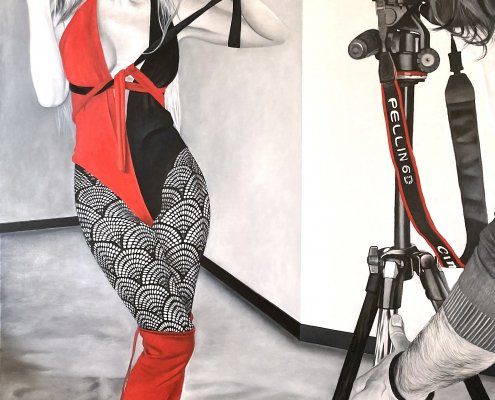 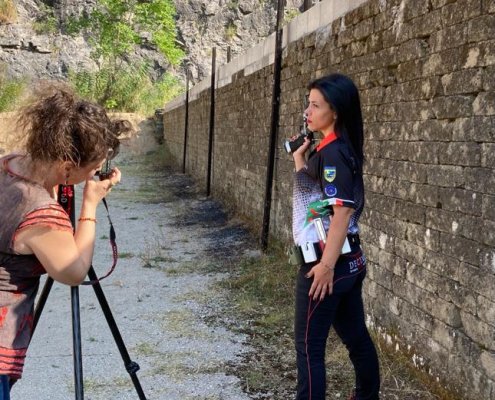 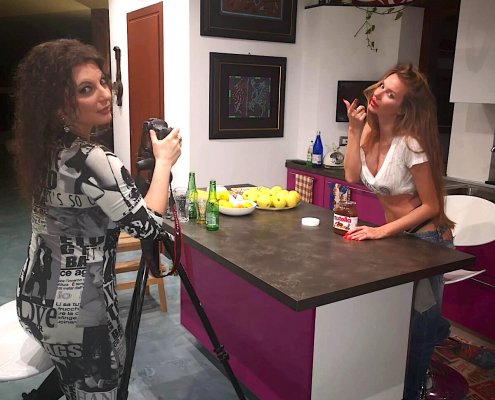 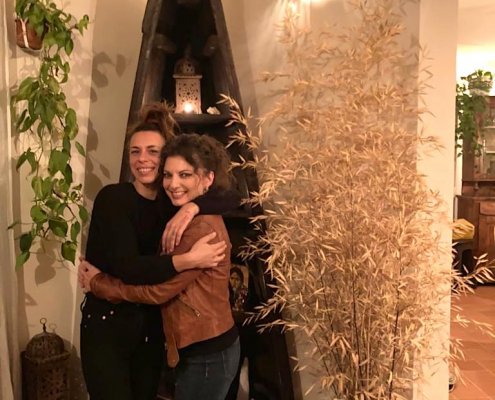 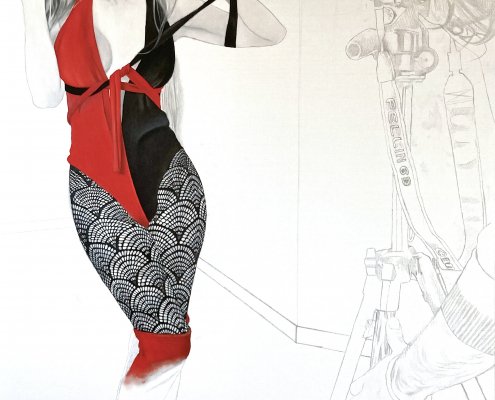 From September 11th to October 10th, 2020, the Galata Museo del Mare exhibition gallery will host an exhibition by Cinzia Pellin, entitled “The temptations”.

The event, which proposes about twenty oils on canvas, is curated by Luciano Caprile who critically introduces the catalog with its text.

Inauguration: Thursday September 10th at 5.30pm. With the participation of Nicoletta Viziano, President of Mu.MA, together with the artist and the curator. Some of the protagonists of the canvases will speak too.

Cinzia Pellin paints the figure of Jesus surrounded by tempting women in an atmosphere between the sacred and the profane. The extraordinary interpretative ability of this Roman artist, manages to enhance the seductive qualities of the female protagonists thanks to a technique of refined elegance where black and white prevails to leave the role of narrative underlines with rapid touches of color.

The protagonist is the light that creates suggestive contrasts and makes the represented scenes three-dimensional. The expressiveness of the faces and the poses of the characters, thus reach a strong emotional charge.

The exhibition shows a male figure who interprets Christ while he is performing the Eucharistic rite of the Last Supper “wrapped in a white garment that seems to want to defend him from the surrounding world”. It is a Christ, as Luciano Caprile writes, who “is not disturbed by the seductive behavior of those around him. His gaze is turned to us, who looks and understand perfectly the role of temptresses, since they belong to our daily reality”. It can also be considered as a reflection on a modern Jesus, who transforms himself from a sacred figure to a deeply human one. Other portraits of splendid women constitute the corollary of an exhibition where female beauty assumes the role of constant visual and perceptual attraction.

Cinzia Pellin was born in Velletri (Rome) on July 19th, 1973. After the Artistic Lyceum she attended the Academy of Fine Arts in Rome, graduating in scenography with full marks. She worked exclusively for the Old Art Galleries of Padua. In Holland she collaborated with the Van Loon Galleries in Vught where she held her own personal exhibition, while today she works exclusively for Belgium and the Netherlands with the Cafmeyer Gallery, in England it is linked to the Different Gallery and has exhibited together with the master Berlingeri at the Moorehouse in London. In 2017 her works were exhibited at the Villa Reale in Monza in the anthology “The Women Beauty” promoted by Caloni Transporti s.r.l. of which she became a testimonial.

Luciano Caprile was born in Genoa on January 14th, 1941. He currently writes on “Il Secolo XIX” in Genoa and on the magazine “Arte in world”. He has curated important exhibitions in numerous private and public spaces in Italy and abroad.

We would like to thank: the curator of the exhibition Luciano Caprile, the director Michelangelo

Pepe and all those who made the success of this great event possible;

and all the participants at the opening and the numerous visitors.